Welcome to EcoScapes – Omaha’s premier eco-friendly lawn care service. As a local, family owned and operated lawn service, we are committed to providing a greener, more environmentally conscious solution to your lawn and landscape needs. We provide a wide range of lawn care services to residential and commercial customers throughout Omaha and the surrounding areas.

We provide a full menu of services including our 6 Step Lawn Fertilization Program which delivers green grass, no weeds, and less chemicals so you never have to worry about the effects on the environment again. We also offer:

At EcoScapes, we are committed to making your lawn beautiful and landscapes spectacular. Our long list of satisfied customers speaks volumes about our expertise, professionalism, and dedication to creating beautiful, lush green, weed free lawns. When you choose EcoScapes as your lawn care provider, you can rest easy knowing that you are selecting one of the most trusted lawn care companies in Omaha, NE.

Our goal here at EcoScapes is to establish a personal relationship with each of our clients so that we can better serve their lawn care and landscape needs. We are always happy to answer any questions you may have, provide a free estimate, or to just discuss your lawn & landscape needs. We are proud to be Omaha’s leading lawn care experts. Our 6 Step Lawn Fertilization and Weed Control program provides just the right nutrients at the right time to assure your lawn is always healthy and thriving. We also offer a complete suite of services for all types of lawn-related issues, from spotty growth, insect and disease control to fungus control and poor soil health. 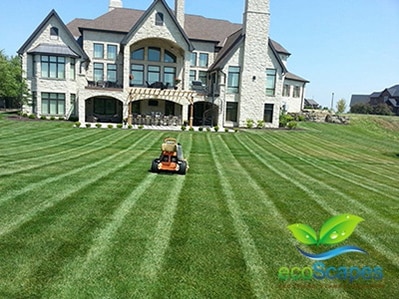 At EcoScapes, we’re proud to be a leading provider of Omaha lawn mowing services. We help our customers save time, save their backs, and get the pristine lawn they’ve been looking for. To schedule a service or to request a quote, give us a call at (402) 671-0453 today. Improve the health, color, and look of your lawn with lawn aeration services from Ecoscapes. We’re Omaha’s aeration specialist, offering comprehensive solutions that revitalize your grass and bring it much-needed nutrients. What’s more, our services come with quality, friendly service, and fair prices. Spring Clean Up – We’ll get everything cleaned up and looking immaculate. Not only do we want to clean things up for appearance but we also want to get any debris off the grass and landscape areas to provide the vital ingredients they need.

Fall Clean Up – We’ll remove the excess leaves and debris from your property and mulch just the right amount to provide additional nutrients for the dormant months ahead. From pruning, trimming, and weeding to annual planting, bed refinement and ground cover such as mulch and rock, we keep your landscape healthy, clean, safe and attractive.

Our “Green” Professionals set the standard each and every day in plant care, weed control, pruning, organic soil amendments and fertilizers, and so much more. Cuts down on unwanted pests entering your home

No harm to foliage or shrubs next to foundation

Protects your plantings and landscape from various insects

What Our Omaha Customers Are Saying

What Sets Us Apart from the Rest?

One simple solution for all of your lawn care and maintenance needs.

All of our services are backed by our Quality & Satisfaction Guarantee. Stay up to date with the latest Omaha Lawn Care News

Homes for Sale in Omaha

Best Places to Live in Omaha Omaha is the largest city in the U.S. state of Nebraska and the county seat of Douglas County. Omaha is in the Midwestern United States on the Missouri River, about 10 mi (15 km) north of the mouth of the Platte River. The nation's 39th-largest city, Omaha's 2020 census population was 486,051.

EcoScapes has done amazing things with our lawn this year. We signed up for their hybrid organic lawn care program and what a difference it has made. True professionals here, customer service is top notch.

My husband has been deployed many times, so I've always had to find a lawn care co. and this is the best lawn care co. I've used. They go out of their way to satisfy the customers. Reliable, on schedule. No worries! The best!!

Had an amazing experience with EcoScapes. They did a spectacular job with our backyard landscaping project including a paver patio, 2 retaining walls, and a fire pit. We could not be happier. I highly recommend!

We decided to go with EcoScapes for our lawn care this year and we could not be happier. We have tried several lawn care companies in the past but our lawn never looked the way we wanted it to. That is until this year... our lawn looks fabulous even in this hot and dry summer Omaha is experiencing.

EcoScapes has always gone above and beyond. We use them for fertilizing, mowing, aerating, and recently to clean things up for winter. Service is always top-notch and they are great people to work with.

Looking for the Best Lawn Care Service in Omaha?

If you’ve been looking for the best lawn care service in Omaha to take care of your lawn, then you have found it. EcoScapes Lawn Care is Omaha’s #1 eco-friendly lawn service near me.

Omaha is a city situated in the eastern Nebraska region along the west bank of the Missouri River and right opposite to Council Bluffs, Iowa. Omaha Nebraska is the largest city in the state with the highest population. It is also a transportation, trade, and manufacturing hub. Omaha in the early days was most well-known for its thriving livestock business. From the early 1890s till today, Omaha is considered as the leader in the meat processing industry. It has the largest livestock market in the world. Omaha NE was founded in the year 1854 and quickly became the gateway to the west. Omaha provided a pathway to the valley of Platte. The name of the city originates from an Indian word which means “upstream people”.

Omaha came into being after being discovered by Meriwether Lewis and William Clarke in the year 1804 when they were on their exploratory journey. It all started out when illegal land speculators started to take the land of Omaha. In the 1850s, many of the Omaha tribe people were selling their tribal land to the United States. The land almost consisted of four million acres which was sold for no more than 22 cents per acre. The Kansas Nebraskan Act was created after this event which created the borders of Nebraska and Kansas. Both these states remained slave free. The new city of Omaha cheered for their new territory on Capitol Hill which is known as Central High School today.

Nathan Philips Doge and Grenville Philips Doge were brothers who left their city of Massachusetts in the year 1853 and moved to the Douglas County area with their family. In 1855, they started a land office in Council Bluffs. Grenville went to serve as a general during the Civil War, but Nathan Philips stayed and created a land-sale business. With his determination, he founded NP Dodge, America’s first and longest running real estate firm.

The Trans-Mississippi and International Exposition

The world’s first fair known as the Trans-Mississippi and International Exposition was held in Omaha in 1898. The main purpose of this fair was to showcase the western culture and its many developments. It displayed the improvements that happened from the Mississippi River to the Pacific Coast. The exposition was a big hit as over 2.6 million people showed up and viewed the 4062 exhibits. The city did an excellent job in hosting the exposition by building temporary buildings and structures for the exposition. Some structures were the duplicates of the Roman temples. Kountze Park was the center of the fair and grand court of the massive exposition.

The national civil rights movement began in the 1940’s but Omaha actually started securing the rights of Americans in 1876 when Standing Bear v. Crook was in strong favor of the Native Americans.  Crook gave them their civil rights.

Omaha was already a very popular city in the country but with the Union Pacific Railroad and large livestock processing, it became even more famous. The Omaha stockyards became the largest livestock processing center of the world. Omaha also gained huge popularity after the construction of Rosenblatt Stadium. It changed the city’s entire fate. Omaha has hosted millions of fans for the College World Series every year since the construction of Rosenblatt. TD Ameritrade Park was opened in 2011 and has played host to the CWS ever since. Eventually the age of Rosenblatt stadium caught up with it and unfortunately, Rosenblatt was torn down in 2012 and turned into a parking space for the Henry Doorly Zoo.

Omaha Nebraska as we know it today is thriving and continues to be the largest livestock market in the world. It is also the largest railroad hub in the country. Union Pacific Railroad was formed in Omaha Ne which has seen immense growth in the last few decades. Omaha is located in the center of the therefore it is a common stop for truckers.

Most of the jobs in Omaha are in the service sector. It is home to some of the world’s corporations such as Mutual of Omaha, Kellogs, and ConAgra. The city also takes pride in being the hometown of Warren Buffett, investor, philanthropist and world renown Billionaire. The city remains known for its excellent food processing. It is a major source of employment and many agricultural related activities are adding to the economy. There are many more industries that are thriving in Omaha such as the metal fabricating, pipes manufacturing, steel casting, truck bodies, farm machineries, and motion picture projection equipment.

The city has many tourist attractions and important landmarks. Amongst the city’s notable sites are The Arts and Entertainment District, Henry Doorly Zoo, Historic Old Market, World Famous Boys Town, and Lauritzen Gardens.

Boys Town is probably the most well-known landmark of the city. It’s significance dates all the way back to 1917 when Edward J. Flanagan made a refuge for the homeless boys. It was a refuge that did not see race or religion. The first year hosted 1000 boys. Soon it gained the title of Father Flanagan’s Home for Boys. It has been a national historic monument since its founding.